Choosing between two good hosting providers has always been a difficult task and it holds pretty much true for ChemiCloud Vs Bluehost.

Bluehost has been one of the oldest hosting companies, ChemiCloud has been around for more than 10 years now but offers similar features & price point while differs at few things which helps you to choose between the two.

I wrote this ChemiCloud review with a view to helping a lot of those customers who are somewhat, locked away and are not actually being able to figure out as to which company is the best for their purpose and you will have a very clear picture by the end of this post.

Let us start with ChemiCloud first.

Advantages of Choosing ChemiCloud over Bluehost

Despite being comparatively a younger company to Bluehost, ChemiCloud still has many advantages.

ChemiCloud provides more days of money back guarantee than Bluehost. While Bluehost offers 30 days, ChemiCloud offers 45 days which is certainly a huge advantage for the users. This would encourage customers to explore more without having to worry about anything.

ChemiCloud also offers Site Migration for absolutely no additional charge. However, Bluehost does not provide users with this feature at all.

The hosting service also includes free site backups feature. In the case of Bluehost, backup is not for free and customers will need to purchase the CodeGuard plugin.

ChemiCloud plans are comparatively affordable than the Bluehost plans. While ChemiCloud allows you to start for $2.77/month while Bluehost startup plan costs $3.95/month. Besides,  If you have to renew the same plan with ChemiCloud, it will cost you $9.95/mo and with Bluehost, you will have to pay $14.95/month.

ChemiClould has 8 Global data centers across the US, Europe, and Asia. However, Bluehost consists of only US based data centers.

Advantages of Choosing Bluehost over ChemiCloud

Bluehost also has a leading edge over ChemiCloud in a few aspects and can be an ideal choice for many customers.

Bluehost has been around for many years now and in addition to this, it is one of the names recommended by WordPress.

Bluehost offers unlimited SSD disk space while ChemiCloud offers limited space. This gives your users a little bit of freedom where you can work with no limitations.

The company gives customers FREE spam email protection but this doesn't come for FREE in ChemiCloud and you can only have it at an additional cost of $36/year.

While Bluehost has 12 months billing on all its plans, ChemiCloud does not have on its Starter plan but does provide 12 months subscription on other plans.

You should, by now, have a very clear picture of both the hosting companies. I tried to keep things pretty simple and comprehensive by having spent a few hours carefully looking into every important aspect of both companies before publishing this post.

However, the choice depends a lot on your actual purpose. The wise way to go about choosing a company is certainly considering your actual requirements first and then see which company has the right mix of features for you. As far as the aspect of customer support is concerned, both companies offer users decent assistance.

Next Post: ChemiCloud Vs FastComet 2020: The Best of Two? 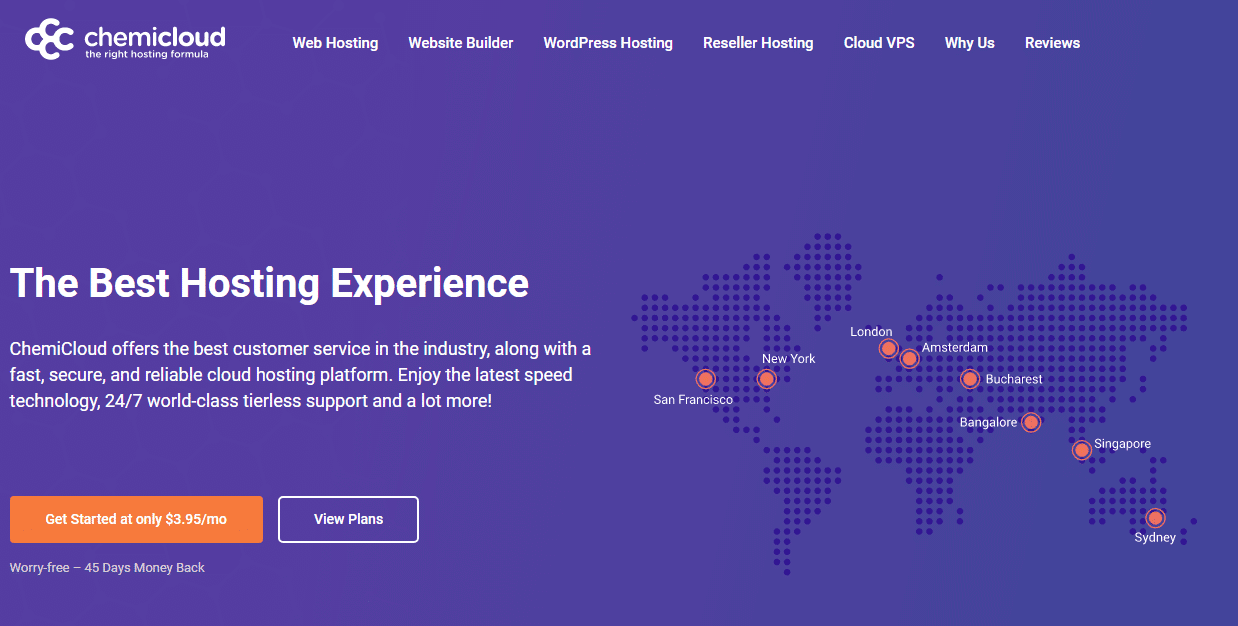 Get started for as low as $3.95/month + Free Domain For Lifetime
CLICK HERE FOR BEST PRICE