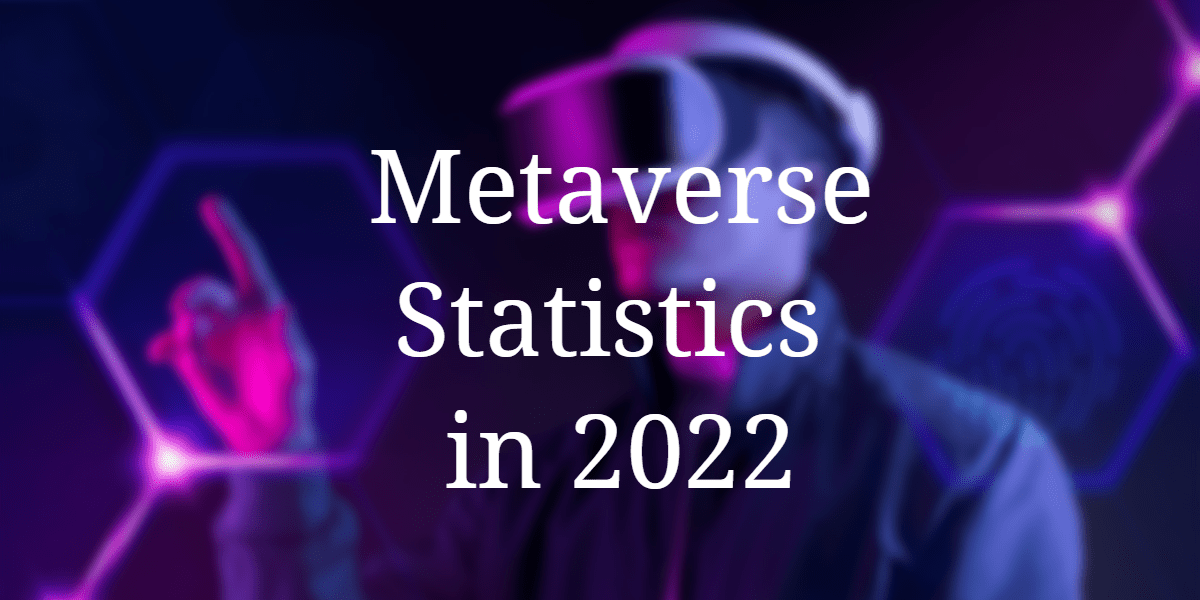 Metaverse marriage has been the peak topic in recent days! The visual world has been taking us forward to the next stage. Metaverse, supporting 3D visualization, has been hugely attracting many younger generations.

This blog will explore more about Metaverse statistics and its associated facts. Let us get started.

The Metaverse Statistics Are

Now, let us get into the separate Metaverse statistics.

Nearly one-third of consumers own an AR/VR gadget, with 15% planning to purchase one in 2022 – Group M

According to the 2022 GroupM Annual Survey on Consumer Attitudes Towards Technology, 32% of respondents stated they own an AR or VR gadget. Another 15% said they want to buy one in 12 months.

By rebranding as Meta in 2021, social media behemoth Facebook shifted its focus to virtual reality and the metaverse. According to The Information, the company's Reality Labs segment employs roughly 10,000 people, accounting for nearly a quarter of the company's total workforce.

From 2020 through 2025, virtual reality will be the fastest-growing content segment –  PWC

VR leads all traditional and digital content formats, with a 30 percent compound annual growth rate (CAGR), followed by cinema (29 percent) and general data consumption (29 percent) (27 percent). Newspapers, magazines, traditional television, and home video, on the other hand, will shrink by 1%.

Oculus Quest 2 VR headgear, created by Facebook for Metaverse, allows participants to meet in a virtual room and utilize a whiteboard to show meeting techniques.

People will be able to design their own avatars and virtually live within virtual reality.

Unlike the boring 2D meetings in the zoom and skype platforms, Facebook believes that such metaverse space (Horizon Workrooms) can provide higher productivity.

Even though Apple has yet to release a virtual reality headset, it has a sizable following. Approximately 33% of respondents favored an Apple-provided headset, followed by a Google-provided headset by 20%. Less than 10% of purchasers still choose Meta's Quest as their first pick.

According to an International Data Corporation (IDC) estimate, global AR/VR headsets shipments will increase by 348.4% in 2021. Standalone VR headsets accounted for 89.8% of the market, which is expected to rise over the next few years, with headset shipments reaching 15 million.

According to reports, Epic Games made a $1 billion investment in Metaverse ambitions on April 13th.

Even though several companies have begun to work on the Metaverse concept, the matter gained traction when Facebook CEO Mark Zuckerberg declared that the company's name would be changed to “Meta.”

Later, Zuckerberg stated his intention to transform Facebook from a social media company to a metaverse firm within the next five years.

Facebook recently invested $50 million in non-profit funding organizations to assist in the responsible development of the Metaverse.

It is estimated that the true metaverse concept will take another 10 to 15 years to come to life.

Microsoft is the only firm globally that generates billions from Mixed Reality. People may virtually connect with one another via various devices, including the Hololens 2, smartphones, VR headsets, tablets, PCs, and any Mesh-enabled software.

In addition, the US Military has proposed a contract in which Microsoft has committed to a big $22 billion transaction that might last a decade. Microsoft also formed partnerships with Niantic, OceanX, and Lune Rouge in March 2021 for their latest Microsoft Mesh technology, which includes holoportation.

On the one hand, businesses are significantly investing in the metaverse, while over a third of consumers are unaware of its existence. According to a Forrester survey from 2021, another 36% in the UK and 27% in the US said they have no need for the metaverse.

According to the Social VR Lifestyle Survey 2021, people that engage in social VR experiences spend over 3 hours a day in virtual reality. Surprisingly, 75% indicated they maintain less physical distance between themselves and others they meet in virtual reality than they do in real life.

Now that the Metaverse statistics have been compiled a bit let us look at Metaverse information and its future implications.

Metaverse Technology has a lot of potentials. It will let everyone interact with both the virtual and physical worlds, allowing anyone to accomplish anything with Applications.

Application in the field of education

The concept strives to make education more accessible and engaging. Practicals and virtual classrooms will be possible. You can embark on virtual field trips from your home or school and feel at ease and lively. Academic field trips from anywhere in the world will be available, which is really exciting.

We can design and have Virtual worlds that mirror genuine physical stores and offices using Metaverse Technology.

Because of 3-D virtual shopping, an updated type of Internet and online shopping that allows consumers to be present virtually, Metaverse technology can improve customers' buying experiences.

Meetings over the Internet

Meetings are unavoidable in various businesses, and productive meetings are the source of the majority of commercial deals.

People with a lot of obligations, on the other hand, can't afford to travel for long periods to attend meetings since “time is money.”

The current virtual conferences are a way to get around the time constraint. Assume, however, that the meeting must be held in a specified location and that attendees must come from worldwide.

Metaverse provides a fantastic alternative by allowing users to virtually create their environment.

Apart from official business meetings, it can be used to meet people on dates, weekend hangouts, view a movie together while sitting on a hillside with stars blinking in the sky, etc.

Metaverse has a number of applications in military and combat training. Creating an accurate virtual reproduction of a terrorist-infested location can aid specialists in understanding everything about the region, including where to hide, shoot, and exit locations.

It provides the ideal training for the team to do the assignment without endangering people's lives.

The current state of fintech technology, which is responsible for online transactions, indicates that the Metaverse concept is becoming a reality.

In October 2021, at an AR/VR conference, Zuckerberg announced that Facebook would be rebranded to meta.

Finetech has also aided in the spread of the metaverse concept. This demonstrates that the gap between physical and digital objects on the Facebook app will be closed. People will be able to log in to the app and Facebook's virtual world.

Oculus will also be renamed meta, bringing all financial parts of the company to the virtual or space environment.

From Metaverse statistics, you can know that Metaverse can build a parallel universe in which you can present your agendas to your colleagues in a well-equipped conference room using virtual properties such as presentations, boards, and pens, among other things.

After the conference, you can go out with your friend to discuss in the nearest restaurant and spend as much time there as you want.

You'll be seated in front of a computer in a different room. One thing is sure: Metaverse will be a significant departure from what we currently know about technology.